With a turnout of about one hundred people in celebration of the one thing Naples does particularly well- Brick Oven Baked Pizza, Giardino d’Averno in west Naples (Pozzuoli) played host for my last pizza. This was an opportunity for me to finish my 365th pizza as well as thank some of the people who contributed to pizzasforsale.com, to include the incredible work on the web design by Mr. Nicolas Wu (below). This won’t be my last post here, I still have to print my final ‘top ten’ list, but below is a summary of the event and my review of pizza number 365 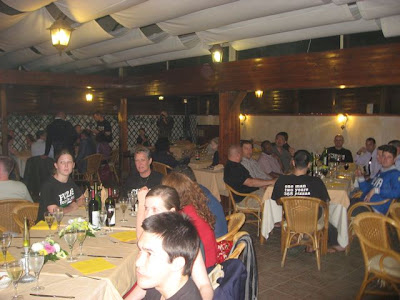 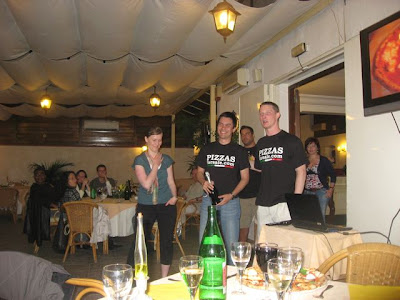 The D.O.C. Pizza, or Denominazione Di Origine Controllata E Garantita, is a Neapolitan specific pizza, regulated by the European Union as an official regional culinary dish of Campania. For my last pizza out of a total of 365 I decided it would be fitting to eat a pizza representative of the region where I have had the majority of my pizzas to date. In order for a pizza to be considered D.O.C. it must be baked in a wood-fired brick oven in under 120 seconds (which is typical for almost all pizzas in the region regardless of D.O.C. certification or not) and include Campania’s premium pizza toppings to include buffalo mozzarella and tomatoes grown on the mineral-rich slopes of Mount Vesuvius. A D.O.C. also includes one or two leaves of basil for flavor.

While I have written about these ingredients earlier, it is worth repeating here that your pallet has not truly tasted cheese or tomatoes until you have had these Campania versions of mozzarella and fleshy tomatoes. The pizzeria hosting my last pizza, Giardino d’Averno, was gracious enough to commemorate my pizza with the appropriate number (365) baked into the crust. My version of a D.O.C. may have been different aesthetically than any other D.O.C. ordered in Naples, but you can trust the quality was the same. The toppings were outstanding and the doughy crust was crisp on the outside and chewy in the inside. On a scale of one to ten I give the toppings a 7.5 and the crust a 5.5 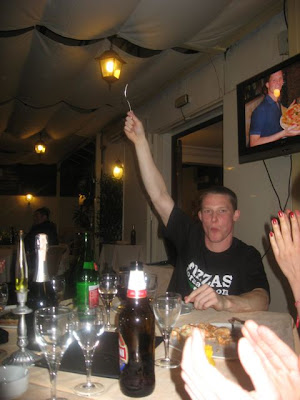 While I have already expounded on the virtues of pizza at length on this website (variety of the dish and inexpensive nature of the meal itself just to name a few advantages…) I’ll be the first to recognize that I have still only visited a fraction of the pizzerias operating in Naples. I don’t think my ‘top ten’ list could be truly authoritative until I have been to more pizzerias in Naples and also outside the Campania region to include Sicily and Lazio. I think the two year intense sampling of several hundred pizzas and pizzerias has led me to believe that the existing ‘best’ pizzeria lists you may find in Italian travel books and culinary-travel magazines are really just a reordering of an all-to-redundant list of downtown pizzerias, probably in easy reach of the writer’s hotel. Secondigliago Pizzerias and Pozzuoli Pizzerias are by far as competent in baking pizza, and on my own scale regularly out performed their more historic counterparts in downtown Naples.

Still, my opinionated position on pizza at the end of my eating mission is almost a bit silly, like choosing between Michelangelo paitings or being the judge at a Miss Universe bikini beauty contest….all the options are pretty good. Hopefully for those of you exploring Naples, either as expatirates or tourists, you will seek out some of the less well known pizzerias written about on pizzasforsale.com or those you found on your own. There is certainly no shortage of quality or personality in Neapolitan pizzerias.