Mozzarella (plus a caprese salad on the side…)

The Pizza Ninni is the simplest pizza I have had in Italy to date (just cheese), and also is easily one of the best I have tasted. Even less complex than a marinara pizza (marinara being just tomato, garlic and one or two basil leafs on crust) the pizza Ninni has phenomenal mozzarella. In 360 pizzas I’ve only found reason about ten times to use the word phenomenal to describe a pizza, but the crust and cheese at Da Emilio were totally deserving of accolades. The pizza itself comes with a Caprese salad (buffalo mozzarella, arugula, and cherry tomatoes in basilico), although I don’t know if it is customary for Italians to eat part of it on their pizza, I went without. While buffalo mozzarella has a milk-creaminess all its own, Da Emilio’s mozzarella has a butteryness all its own. I don’t know what the cows who produce the mozzarella milk are fed, but it must be something exceptional. Da Emilio’s crust is thick like a Neapolitan crust, even though Gaeta is much closer to thin-crust pizza haven Rome, than it is to Naples. Rich mozzarella, perfectly cooked, makes this a memorable pizza. On a scale of one to ten I give the toppings a 8.5 and the crust a 6.5 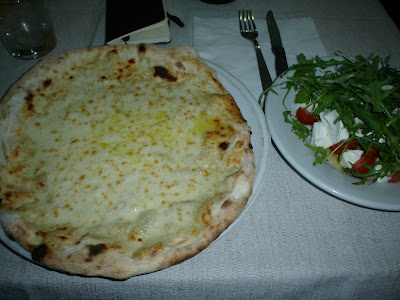 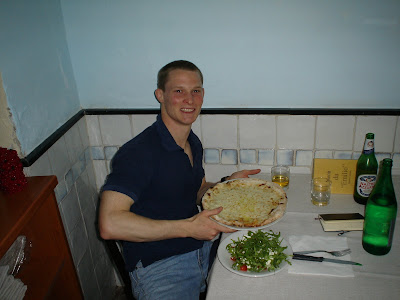