IL Pizzicotto sits at the center of student life in Naples, along MezzaCannone Street between small librarios and Naples University. I would expect pizzerias in this part of Naples to be both cheap and average, but was pleasantly surprised by the quality of pizza at Il Pizzicotto. Il Pizzicotto rests along a street full of university copy stores that seem to do a thriving business in ignoring copyright laws and churning out Xerox’d versions of countless student textbooks and literature. Three smells dominate this street; toner ink, cigarettes, and pizzeteria cooking smells. Most places serving pizza in this area sell pizza by the slice in large rectangular cooking trays, usually prepared in an electric oven. Amongst the budget constrained students in this area quantity trumps quality with a few exceptions. 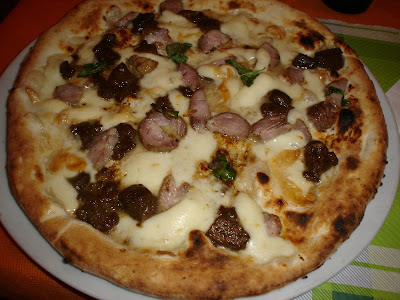 Il Pizzicotto produced a great sausage and porcini mushroom pizza. The cuts of meat were low fat, the provolone provided and excellent base, and the porcini mushrooms were the most generous size I have seen to date. The provolone helped flavor both the sausage and the porcini, and the thickness and flavor of the porcini mushrooms made this an excellent pizza. The pizzaiolo informed me that this was his best pizza, and I would hardly disagree. There were no shortcomings of the crust either. On a scale of one to ten I give the toppings a 8 and the crust a 8 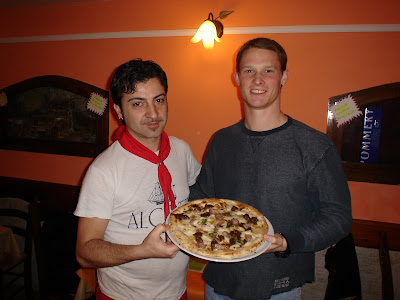