This was probably the greasiest pizza I have had that was entirely edible. Spicy cheese and grease were the two main ingredients in this pizza. The two or three different kinds of pork that were the source of so much oil and grease were as delectable as they were unhealthy. Since there was no ‘Annare’ pizza here that was for less than four people at once, I went with the ‘Toni’ pizza which is named after the cash register guy at Annare. I don’t know if the Toni pizza is as much a statement about Toni’s taste as it is his personality, but it’s a good pizza (perhaps best split with more than one person). The added pepper and substitution of regular mozzarella for its spicy counterpart are all nice culinary touches. 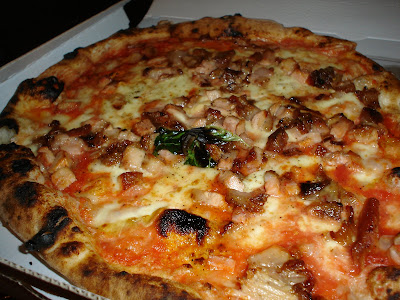 Perhaps most importantly this pizza comes on a thick crust (normal for Annare) that gives your stomach some respite from the spicy and oily toppings and ensures digestion of the pizza remains in the realm of the possible. If you are visiting Annare during the summer there may be a few plastic chairs outside, but I prefer to wait here and try some of the fried cornmeal slices being sold at the front desk. Although I wouldn’t combine the fried cornmeal with the Toni pizza…so on a scale of one to ten I give the toppings a 5.5 and the crust a 7