Does Da Michele Pizzeria Make the Best Pizza Ever?

If you have looked at my top ten list, of the 300 or so pizzas I have tried, then you know my answer to the above question is a certain ‘No’.

However, if you had just got off of a plane from America, and had never tasted anything close to an old-world pizza, then the probable answer is a resounding ‘yes’. A steady diet of electric oven, pizzeria chain produced pizza will do a lot to condition your palette towards mediocrity. So if Da Michele was the first pizzeria you ate at in Italy or Naples, then that initial taste of near-liquid hot mozzarella, sitting on a pizza crust that was baked and born less than sixty seconds ago, should shatter your preconceptions of what pizza is and can be. 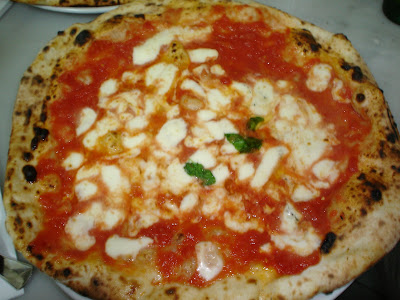 Then there is the exquisite taste of exclusivity. Da Michele draws bigger crowds than other pizzerias, certainly because of its high quality two-pizza menu, but also because of being a well-publicized pizzeria. With thousands upon thousands of pizzerias in Naples, you think it would be simple to get a seat at a table that serves pizza, but on most evenings a sizeable number of tourists and Neapolitans (always a good sign) are crowded along Via Sersale waiting to get a taste of either a margherita or marinara pizza. Da Michele’s notable mention in Elizabeth Gilbert’s book ‘Eat, Pray, Love’ and regular features in travel guides makes it probably the most well-advertised pizzeria in the world. 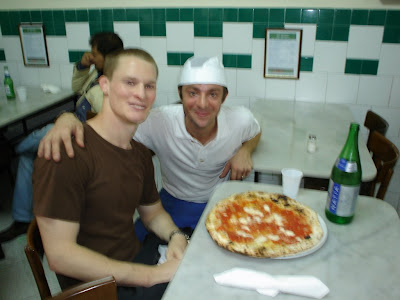 Even among Naples’ top pizzerias, Da Michele is still considered preeminent. For example, Da Michele and Pizzeria Trianon are both on Frommer’s Guide to the Amalfi Coast ‘Best Neapolitan Pizza in the Historic District’, but to give you an idea into the disparity of demand between some of these locations, you can just glance at their entrances when they are open. On a Friday night you will probably see about fifty people in line outside of Da Michele, and just ten outside of Trianon. 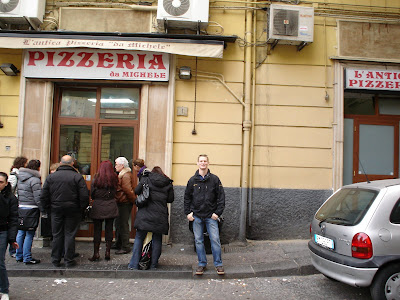 So, if people are voting with their feet for Da Michele, and I fully agree that Da Michele makes some great margheritas, you may ask why I don’t think their pizza is the best ever. For all the pizzerias that can offer high quality ingredients and excellent robust crust, many of them are nowhere near accessible for tourists or more importantly, tourist guide writers. Places like Carmeniello’s in Secondigliago are not exactly the most accessible or safest place in Naples, so getting there, let alone finding the place at night is unlikely for a tourist. Other places like Pozzuoli’s Acqua e Farina, which could give Da Michele an education in crust making, is near no major hotels or museums. The twelve mile trip from downtown Naples would be a bit of a stretch for backpackers. So I think there are many overlooked pizzerias in Naples that I believe are better than Da Michele, most of which make full use of Campania’s phenomenal range of vegetables in addition to the great mozzarella Da Michele employs in their pizzas. While Da Michele makes a great margherita pizza, they are certainly not the only pizza talent in Naples. If you ate your first old world pizza at any of Naples’ best, you would probably think you were eating your best pizza ever at that particular location as well.