Pizzerias are the most honest enterprise in Naples. Everything that goes into the product you are buying is prepared in front of you, the labor and method of production all visible before your eyes. Unlike many of the things you can buy in downtown Naples, pizza is one of the few things produced where the visibility of the process is a key selling point. Pizza brick ovens are usually at the forefront of pizzeria entrances, with every bit of food preparation and pizza making flair for authenticity, as much as it is for show. There are no knock-off pizza versions or pushy sell tactics, and in the end the proof is in the pizza. If in the rare circumstance you are displeased with your pizza in Naples, you should only be out four to five euros. 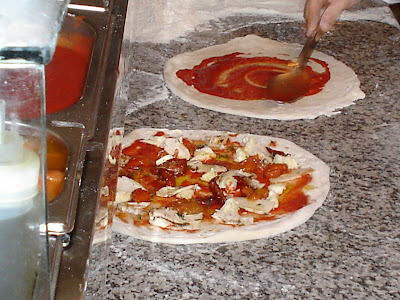 That is exactly why I don’t mind waiting ten minutes for the pizzaiolo to whip up a Bolognese sauce for my pizza, rather than adding something prepared earlier. The toppings were fresh, although Bolognese sauce is probably best kept to pasta for a reason. Hamburger is greasy to begin with, and does not enhance a Margherita pizza. It doesn’t ruin a Margherita pizza either, but this is one variation on a pizza you can probably pass on unless you never intend to try Spaghetti Bolognese the normal way. On a scale of one to ten I give the toppings a 4.5 and the crust a 5.5 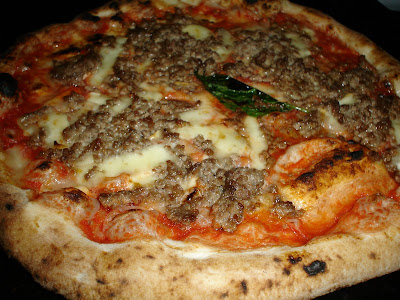