The Varenne pizza at La Loggia del Paradiso is a good example of how a novelty pizza is more than just pretty pizza aesthetics. About a third of the pizza crust has been folded over itself to create a shape similar to a cornucopia or a sea shell. The folded portion contains raisins and capers that help flavor the spinach, and in my sampling, is unique to La Loggia. The capers and raisins take an otherwise average vegetable and enhance the flavor. Using a calzone-style crust to marinate the flavor is also effective. The cherry tomatoes and sauce are relatively fresh, and on a scale of one to ten I give the toppings a 6.5 and the crust a 7.5 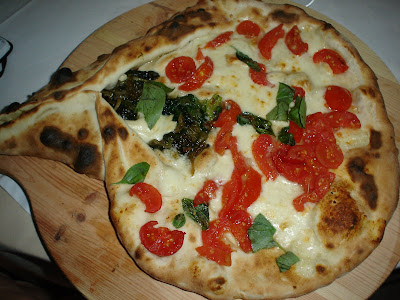