This was truly a mismatch of good tastes, and an example of why good toppings alone do not necessarily make for a good pizza. I also noticed that on my second pizza here, the wood fired brick oven was really powered by gas. While it appeared to be identical to an authentic brick oven, the oven was lacking wood chips for fuel and the heated brick surface that is critical to evenly baking the pizza crust. Not only do electric ovens deny the pizza diner the subtle tastes of charcoal flavoring, referred to as char, but electric ovens tend not to cook the toppings as evenly as the crust, since the brick oven bottom is allowed to cool down in between pizzas in the faux-gas(the electric) oven. To read more about standard brick oven baking, please see this post

Individual parts of this pizza were good, like the brie and zucchini, and the salami and mozzarella. Combined though, spicy salami does not go well with pungent and sweet brie. Despite those shortcomings, the dough mix must have been good, because most of what I tasted in the crust was satisfying. The crust was thick and full, and even without the charcoal flavoring was still decent. That still makes it an improvement on the earlier pizza I tried at Foghers .On a scale of one to ten I give the toppings a 4.5 and the crust a 5.5 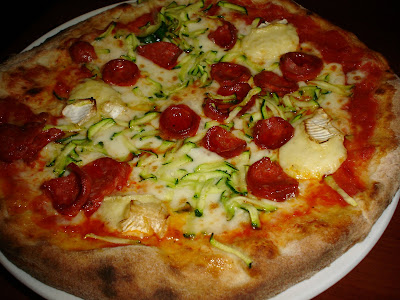