La Bucca Ristorante, as with my previous pizza here, drowned the pizza toppings in oil. However in a marinara style pizza like the La Soute, that is a forgivable excess. This simple seafood pizza has tasty toppings and has a fresh marinara base. However, the crust is weak compared to the Neapolitan standard. Once all the mussels have been removed and placed on the pizza, there is not much taste aside from the seafood and the oregano. This pizza would be a much better choice during the summer, when a light and fresh taste is more appetizing in the humid Neapolitan climate. A more robust crust would have also been nice as it would help disperse the large amounts of olive oil. On a scale of one to ten I give the toppings a 5 and the crust a 3 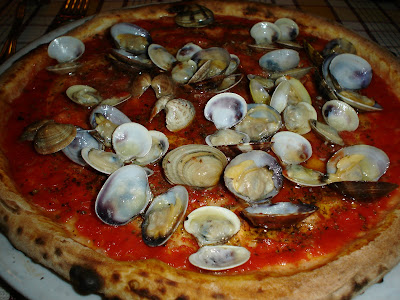