Medusa marks my first pizzeria in Sicily to date. The pizzeria is named for the Triskelion image on Sicily’s flag, and I was curious if Sicilian pizza carried any unusual features compared to all the other pizzerias on the continent. The Sicilian waiter professed to know no particulars of Sicilian pizza that was not already a part of Italian pizza writ large, but this was the first pizza I have had in which anchovies featured heavily in the pizza and were not merely scrawny bone fish. The anchovies were thick, and the numerous toppings made this an extremely filling pizza. Over-stacking a pizza with numerous toppings is sometimes and attempt by the pizzaiolo to qualify the house pizza as a ‘works’ pizza. It does not necessarily mean there is any special fusion amongst the ingredients, and may be a shortcoming of my strategy of always ordering the house pizza if one is available. 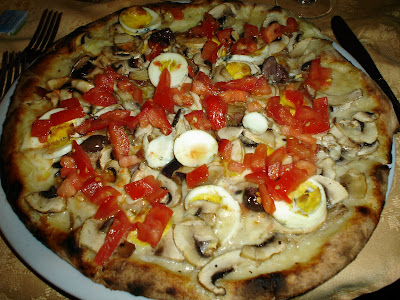 One-third of the pizza crust was burned, which is my only criticism of the buttery pizza crust. There is nothing stellar about Sicilian pizza at Medusa, but the individual toppings were of high quality in terms of freshness and quantity. The restaurant advertises itself as a steak, lobster and pizza restaurant, so maybe a dedicated pizzeria would be a better choice for my next round of pizza in Sicily. This was an above average pizza, and it doesn’t hurt that Medusa accepts Dollars instead of Euros at a one for one exchange rate, which basically amounts to a 30-50% price discount so long as you can pay in cash. On a scale of one to ten I give the toppings a 6.5 and the crust a 5.5 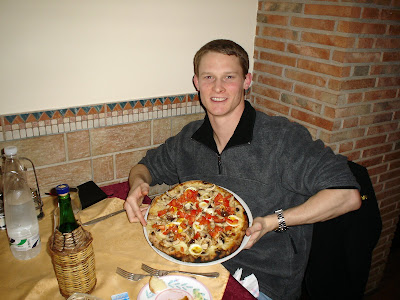