Annare is another little pizza gem of Naples sandwiched between an Agip gas station and an alley. On a pothole-ridden street in Doganella (so any street in Doganella), Annare sits almost directly above the Tangenziale toll road exit to Capodichino airport. If you are starting from the airport, Annare is easier to reach on foot than by vehicle given the M.C. Escher-esque one-way streets that theoretically could lead you to Annare…..but probably won’t. Even if you get to Annare there is no seating to speak of, which is fine, since if you just want to try their pizza they will have you in and out of the piazzetta awning in about five minutes. Apparently most people don’t hang around Annare after ordering, since the Agip station attendant strolled over from his perch on a diesel pump to ask me if I wanted any gas with my pizza. I would advise you to skip the diesel but do try the Sausage e Friarielli pizza. The expansive crust handles the heavy toppings and mozzarella base well, and was worth eating on its own. On a scale of one to ten I give the toppings a 6 and the crust a 7 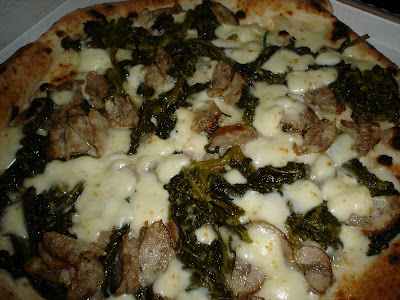