The group present for pizza number 300 managed to eat a total of 17.5 meters of pizza in just two hours at pizzeria Mont Chanteau in Pozzuoli. With over sixty people present to mark another centennial pizza eating milestone, I decided to have the meatball pizza from Mont Chanteau. 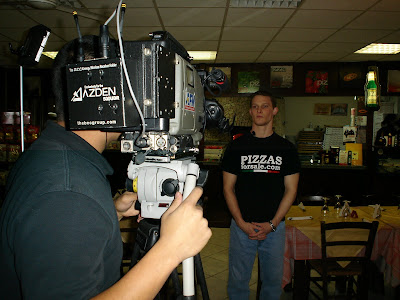 Local news arrived to cover the crowd and the 300th pizza, which was a special version of Mont Chanteau’s meatball pizza containing extra crust sauce to spell put the numbers ‘300’. Roberto, the pizzaiolo who made the pizza, had previously worked in upstate New York before returning home to Naples to start his pizza franchise. Consequently, some of his pizzas are standard Neapolitan classics like margherita and capricciosa pizzas, while others are hyrbrids of Neapolitan pizza bases (mozzarella, basil and tomato) and popularized American pizza toppings such as jalapenos , chicken nuggets, and bar-b-q sauce. The meatball pizza was the best of the three Americanized pizzas I have tried here. 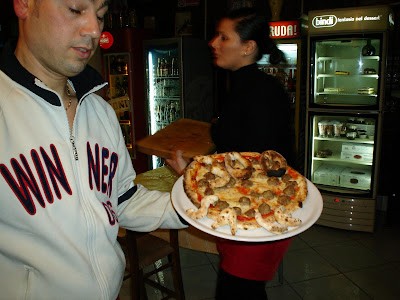 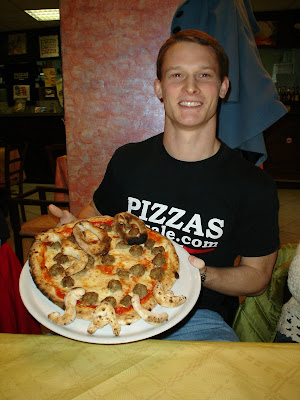 The sausage meatballs were tender and non-fatty. The relatively simple pizza was enormous, and didn’t need anymore ingredients to be filling. The additional breadsticks shaped in the form of ‘300’ added plenty of extra carbohydrates to the pizza, and gave me something to soak up the extra tomato sauce with. I think this is a great ‘intro’ pizza to the Neapolitan style of pizza. Neapolitan pizzas do not have nearly the amount of added sugar that fast food pizza variants offer, and Neapolitan pizzas also have a much creamier (read: tastes better) mozzarella on the pizza base. The meatball pizza, made with a familiar sausage topping, does not change any of the features of the Neapolitan base, but does give a good context for understanding why brick oven-baked pizzas taste so much better than their North American counterparts. On a scale of one to ten I give the toppings a 6 and the crust a 5 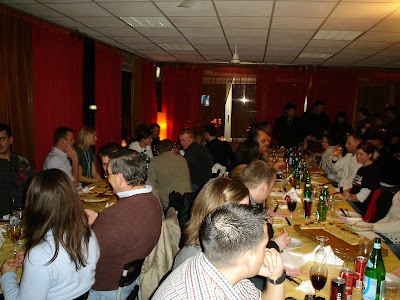