It is a good thing I didn’t judge my pizza on the quality of the service, as Pellone has all the friendliness of a pitbull. The maitre d’ seemed unhappy he had customers and even told customers that they were waiting too long-an uncommon phenomenon in the ‘coperto’ culture of Italy in which you pay for your table access.

Despite the service, pizza Pellone produced a phenomenal pizza. I’m a bit surprised Pellone does not often appear in tourist guides (maybe because of the unwelcoming environment), as the pizzaiolo and pizza ingredients are clearly a level above most of their peers in downtown Naples. If you do not like onions or fresh tuna then you are unlikely to agree with my review on this particular pizza, but everything about this pizza from the thickness of the crust to the flavor of the olive flesh is indicative of a place that does produce superb pizza with great pizza ingredients. 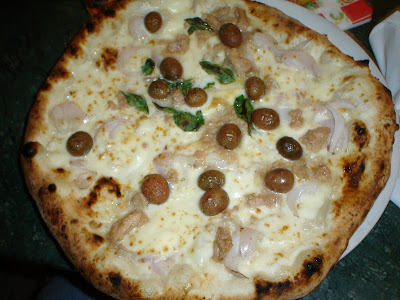 This is the first pizza I have had in which olives feature prominently in the pizza, both aesthetically and in terms of the mass of ingredients. Rather than an ingredient afterthought, the olives were left uncut and with their pits. The fat green olives sat like meatballs on the provolone, and the thick olive flesh separated easily from the pits. The thick doughy crust could easily be an appetizer in its own right. With a bit of olive oil I could have eaten just the crust for dinner. The healthy cuts of tuna and provolone were delicious, but what really made this pizza were the complimentary tastes it possessed. The briny taste of the olive complimented the tuna, and the strong tastes of onion and provolone were balanced by a thicker than average Neapolitan crust. Often times Neapolitan crusts rapidly thin-out towards their centers, which can make strong ingredients flavors overwhelming. By utilizing a thicker crust, Pellone’s pizzas have a moderating ingredient that helps balance the strong tastes of grilled onions, olives, and tuna. On a scale of one to ten I give the toppings a 9 and the crust a 8 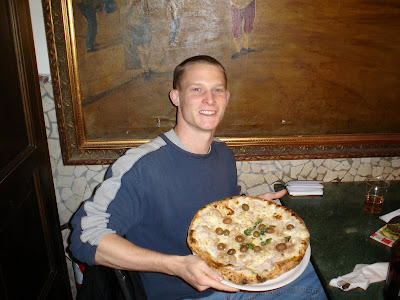