Baku redeemed itself with an excellent set of pizza toppings. Pizzeria Amor did not improve much on the crust I had the previous night in Baku, but still did a decent job of combining toppings and a cheese base. The Dutch-Azeri pizza owner I spoke to could not boast to have as authentic clientele as Taverna, but did do a better job of baking a pizza. None of the four pizzerias I scoped out in Baku have brick ovens, so there are definite limitations on a quality crust, but Amor still managed to find some decent tuna and butcher-cut salami for my Shopino pizza. I was a bit surprised by the fish, since even a cursory glance at the Caspian Sea should give a diner pause at ordering fish in Baku. Azerbaijan was a center for petrochemical processing during the Soviet Era, and much of the chemical waste produced was dumped directly into the sea. However I don’t think tuna is native to the Caspian Sea so I felt safe eating this pizza.

Amor served a highly symmetrical pizza, with sliced salami set carefully on a mozzarella base and cut tuna. All six toppings were stacked high, and helped compensate for a crispy, but tasteless crust. The mushrooms were fresh and the salami seemed to be from a low fat mix, with hardly any oil typical of processed pepperoni. Caspian Sea pizza, while not competitive with its Neapolitan counterpart does have some positive aspects. On a scale of one to ten I give the toppings a 6.5 and the crust a 3.5 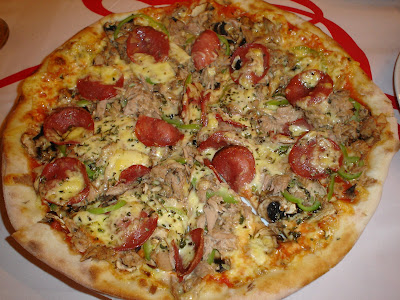 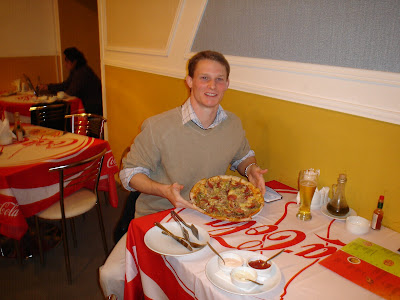