In the former Soviet Union republic of Azerbaijan, amidst rapid economic development, a cluster of new pizzerias have been built to feed the international clientele that are looking for alternatives to Azeri and Turkish restaurants. With only a few days to sample several of the pizzerias available, I erroneously thought the pizzeria founded by Italians would provide the best pizza. Passing up the comically named ‘Pizza Hat’ (yes ‘hat’ not ‘hut’, but in Azeri it sounds about the same as its American Pizza Chain-cousin) for ‘La Taverna’, I headed towards the embassy district of Baku to dine at the Italian-established pizzeria. Initial indications for La Taverna’s authenticity were good, as the pizzeria had exclusively Italian clientele. 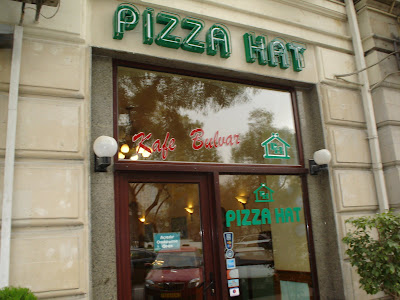 I think my pizza would have been better at ‘Pizza Hat’, as the pizza here had all the consistency of a store bought frozen pizza. The crust was tasteless, like a bland cracker, and the toppings were no different than generic cheese cooked on deli meat. It may be that the restaurant owners were more eager to set up a place like home, than produce the ‘taste of home’, but their crust could certainly use some of the expertise that exists in Neapolitan pizzerias. More interesting than the food at this restaurant were the clientele. Based on dress and the air of self importance that some of the other diners carried themselves with, I wondered if any of them were Mafioso types. Maybe they had escaped Italy to the distant oil-boom town of Baku, where the fluid interpretation on international law may make extradition an unlikely prospect? As for the pizza, on a scale of one to ten I give the toppings a 3.5 and the crust a 2 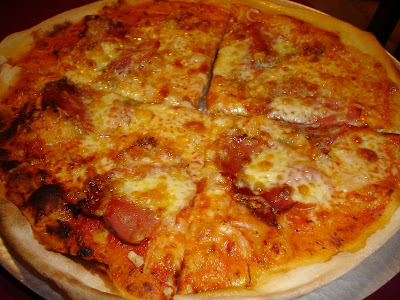