While hiking to my next pizza location through the crowded streets of downtown Naples I noticed I was being followed by three dogs. While there are many semi-feral dogs in Naples, subsisting off the large amounts of strewn street garbage and handouts from sympathetic store owners, these dogs were definitely trailing me. Throughout my whole walk to Pizzeria Ettore, they never passed me or did anything aggressive, but did wait when I stopped, moved when I walked, and always maintained a distance of about ten feet from me. Before you conclude I am concocting wild theories about the urban wildlife of Naples, you should consider that these same three dogs even waited outside of Pizzeria Ettore for me for almost an hour while I finished my pizza before following me again back to the bus stop

The whole event made me wonder if the wild dogs of Naples can sense non-Neapolitans from others, and expect that one group (tourists or foreigners) is more likely than another to give food handouts? I certainly had no left-over’s for the dogs from pizzeria Ettore, as the pizza I had was disappointingly undersized. I am not sure what to make of the ‘Pagnotiello’ as it was served under the pizza menu, but lacked a typical pizza base. The dough was cooked as normal in the pizza oven until it expanded like a balloon, and then removed by the pizzaiolo and cut into two halves. The equivalent of a set of salami pizza toppings were then placed between the two crust halves similar to a saltimbocca sandwich (except prepared in reverse order). This pizza reminds me of several other interesting pizza shape variations that did not live up to my expectations such as the bowl pizza and the ring pizza. Judging from the number of Italians inside Ettore I would guess that the pizzeria does produce several good dishes, and I will have to give Ettore another try before drawing any conclusions about the rest of their pizza menu. As for the Pagnotiello, on a scale of one to ten I give the toppings a 5 and the crust a 5 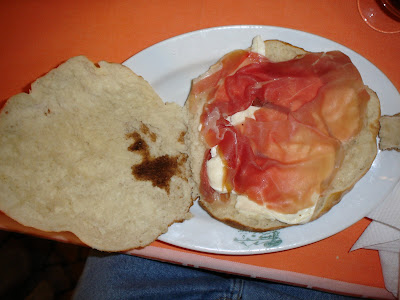