Contrary to my pizza let down at Il Presidente , I was not disappointed by a repeat visit to Il Tucano. Tourist guides describing the bay of Naples and Porto di Baia often mention Il Tucano, and rightly so. Even though Il Tucano is well removed from downtown Naples, Porto di Baia offers a microcosm of what is quintessentially Naples: Ancient Roman temples and architectures, great panoramic views, and awesome pizza. Perhaps for that reason Porto di Baia appears in the second season of the HBO series The Sopranos, and although not directly visible, the promenade where Il Tucano sits is in the backdrop of two scenes of the second season.

The ‘Euro’ pizza is easily among the top five pizzas I have tried to date. The pizza strives for excess (a four cheese pizza combined with a sausage and spinach pizza) and succeeds, without undercooking the crust or sacrificing quality of ingredients for quantity of ingredients. The pizza itself does not look overcrowded, since the four-cheese portion composes the pizza base, free of any tomato sauce. The addition of sausage and in particular, the cream of spinach, makes this pizza special. Most sausage-plus-vegetable pizzas utilize a peppery leaf called friarielli. Friarielli is a good leafy vegetable, but the substitution of creamier spinach in this pizza was a great decision. The cream serves as a nice sauté for the sausage and the spinach, and rests on a base with a much more potent set of cheeses to include gorgonzola. The combination of six ingredients makes this a heavy pizza, but the pizzaiolo ensured that the crust was thick enough by Neapolitan standards, to support it. Additionally, the healthy sized crust gives your palete a means on which to process all the strong tastes of cheese, spinach, and sausage. On a scale of one to ten I give the toppings a 7.5 and the crust a 7 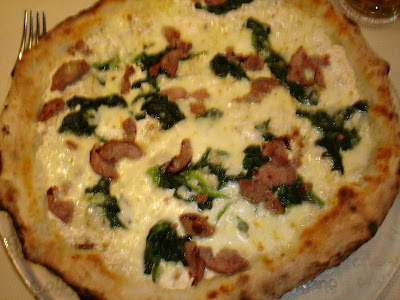 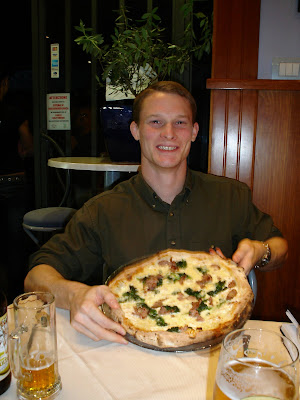