IL Presidente derives its name and popularity from the singular event in 1994 when Ernesto Vicenzo (Cacialli) prepared a pizza for Bill Clinton during the G7 summit held in Naples (and rightfully full of significance, it is quite an achievement). At the time Ernesto Vicenzo was a pizzaiolo at Di Matteo but later moved and established his own pizzeria following his meteoric rise in the pizza world of fame. The front of the pizzeria displays numerous pictures of a young President Bill Clinton, other prime ministers and presidents posing with Ernesto, and more than a few ‘Uncle Sam’ caricatures. 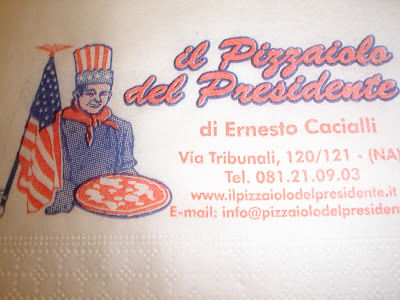 Unfortunately for me, Ernesto Vicenzo was nowhere near the pizzeria when I tried a capricciosa pizza prepared at the pizzeria. The crust was bad, and the mutual review from six other diners was that they also had undercooked crusts with watery tomato sauce base. The toppings were above average, with excellent prosciutto and mozzarella. At least ingredient selection at the pizzeria seems to be functioning. However enjoying good pizza toppings with poor crust is a bit difficult. It seems as if the normal fall harvest flavors (olives, artichokes, fresh prosciutto, mushrooms) that compose the toppings on a capricciosa exist independently when there is not a solid crust underneath them. Instead of a combined taste, the pizza delivers a ‘five things I warmed in a brick oven’-taste. On a scale of one to ten I give the toppings a 6.5 and the crust a 3.5 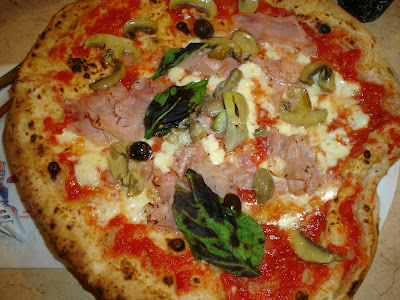 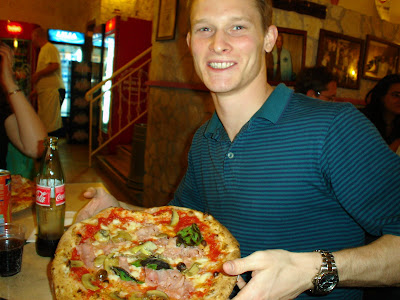