Pizza and a Bribe. I enjoyed my second pizza at Giardino d’Averno, but it may also have been my first experience being bribed as an amateur pizza critic. The maître d’ asked me if I had previously been at his pizzeria writing about pizza ), I indicated that I had and then ordered a tronketto pizza. When I asked for my bill after I finished the pizza, I received a receipt holder with fifteen euros in it. I was not sure if I should be surprised that my opinion was being bought or that my opinion was only worth a paltry fifteen euros. A bit surprised, I looked around the restaurant. There was only one other table occupied at the obscenely early hour of eight in the evening, so I think it was unlikely my bill had been confused with the other table’s change (who still happened to be eating)…but I could be wrong. After asking for the check a second time, I got my actual bill and paid for a very good tronketto pizza. 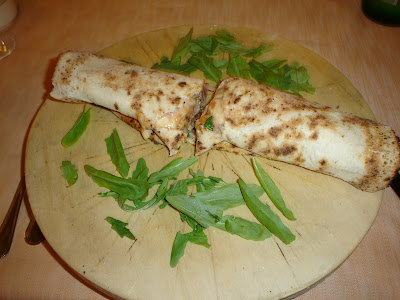 The contents of the wrapped pizza, were excellent, the crust less so. The prosciutto’s normal tenderness, seems to be enhanced after being cooked in the enclosed tronketto crust, and benefits from losing no moisture to the evaporative oven heat. Tronketto pizzas are a great variation on normal pizza, and I recommend trying one simply to get an idea of how pizzas can be served aside from the standard open-face style. Possible bribe not withstanding, this was an above average pizza. On a scale of one to ten I give the toppings a 7 and the crust a 5 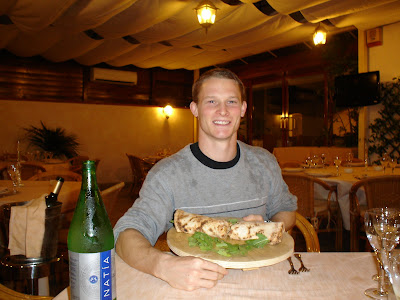