Traveling to pizzerias outside of downtown Naples is often fraught with danger. Rather than the pedestrian hazards; speeding scooters, drivers going the reverse direction on one-way streets, and packs of patrolling mongrel dogs, driving outside of Naples provides a variety of auto-related challenges. Amongst English speakers in Naples, many of these hazards are named not by their less-than-apparent traffic signs or the highly redundant use of the ‘Umberto and Vittorio’ naming conventions, but rather by their appearance and larger-than-life presence in the daily life of non-Neapolitan commuters. For example, to reach Pizzeria Fox in Monterusciello coming from central Naples, you may first exit the toll-road onto the ‘Round About of Death’, then continue through the suburb of Pozzuoli taking a right at ‘Touch Down Jesus’, and finally taking a hard right at ‘The Evil Fork in the Road’ near Monterusciello. Pizzeria Fox and Non-Solo Pizza are along the side of the exit you would take once you reach the ‘Evil Fork in the Road’. As many of these traffic euphemisms suggest, you are taking your life or your car’s well-being into your own hands when you drive in these areas. To a non-resident, it is hard to describe how these roadmarks add a daily dose of drama to my morning commute or search for pizza, but suffices to say you would not expect to have a single fork in the road to have six ad-hoc lanes of traffic….but it often does.

The driving adventure is not always worth the pizza, but usually worth the overall experience. In this case Pizzeria Fox’s canned mushrooms did little to enhance their Panna Prosciutto and Funghi pizza (cream, ham and mushrooms). When mushrooms are simply dumped on the tomato and mozzarella base it seems as if the pizza toppings fail to fuse into something greater. The crust was more than sufficient, and further straining of the ingredients from whatever water solution they were in would have supported the heavy cream that is added to the base. The heavy cream does not gel as well when it is mixed with other moist ingredients, and the pizza toppings on this pizza suffered as a result. On a scale of one to ten I give the toppings a 3.5 and the crust a 5 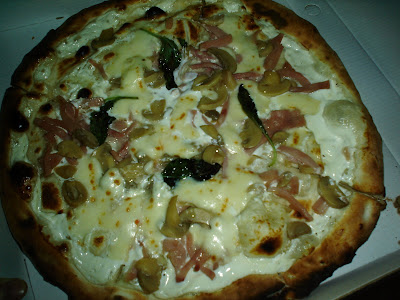 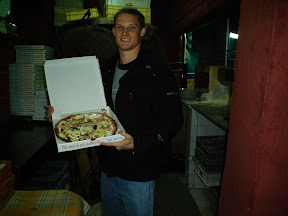