Via Tribunali is one of three main pizza concentrations for pizza aficionados in Naples. The narrow road where Sorbillo pizzeria is located was recently in the news last month, as it was part of a film site for the actress Julia Roberts who was reportedly filming the first third of Elizabeth Gilbert’s book-gone-movie ‘Eat, Pray, Love’ . The narrow cobble stone road and density of pizzerias makes the path a picturesque setting for becoming immersed in Neapolitan culinary tradition. Via Tribunali is an ideal place to specifically eat pizza in Naples, possessing three of Naples most well known pizzerias; di Matteo, del Presidente, and Sorbillos itself. Da Michele , Trianon and Pizzeria Brandi round out the other famous six pizzeria of Naples, and are all located further away.

Sorbillos, by far, serves the largest single person pizza I have ever seen. The entire crust of the pizza hangs over the large serving plate, touching the dining table. The crazily wide circumference alone suggests that you are in for an extra ordinary dining experience. 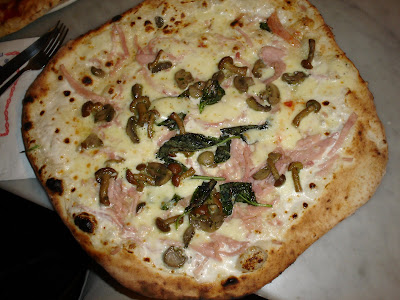 The pizzas on Sorbillo’s menu are named after the founder’s grandchildren, and I tried the ‘Aldo’ pizza. The pizza had excellent ingredients, both the succulent chiodini mushrooms and the strips of ham. The heavy cream was generously spread on the large pizza but was thoroughly cooked to allow the pizza base to thicken. Sorbillos crust, despite its size, was less spectacular than the ingredients. With such a wide crust the edges have almost no room to swell upwards into typically chewy Neapolitan crust edges. The crust was well cooked, but was not special in its own right. Still, this was a very good pizza. If you are only briefly visiting Naples, both the ambiance and the quality of the pizza are good reasons to justify a visit to Sorbillos. This pizza location seemed to satisfy Hollywood, and will probably satisfy your stomach as well. On a scale of one to ten I give the toppings a 7.5 and the crust a 5 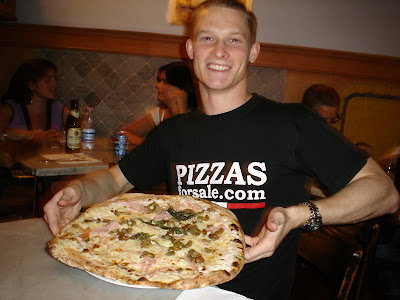 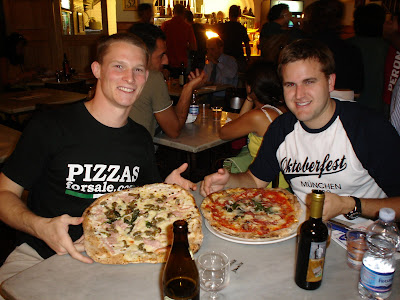