After fighting obscenely dangerous traffic for a year, and busying myself with ‘how not to be robbed’ in my home and on the streets of Naples, I sometimes become disappointed with an area that would otherwise be a tropical paradise (warm weather, beautiful views, exotic islands nearby, numerous historical ruins). I find the best cure for the Napoli Blues is to visit a pizzeria. No other location seems to contain the congeniality and friendly approachability of common people as a Neapolitan Pizzeria. Here (in a pizzeria) there are no physical barriers between the wait staff, the chefs, and the customers. Everything is up front and visible, from the ingredient preparation, to the pizzaiolo working next to his brick oven, to your bar-like chair seating only a few steps away from the oven. For an inexpensive five Euros you can buy conversation, company and culinary satisfaction in the warm outdoor air of Naples. 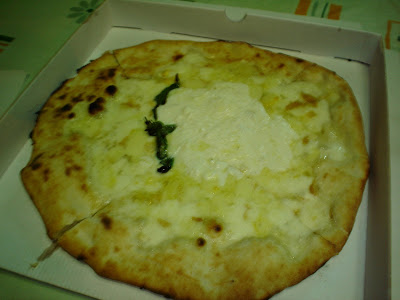 Pizzeria Napoli-Mania was no different, and had almost a cathartic effect on my current mood. While I waited for my four cheese pizza another customer, a local leather worker, gave me advice on how to protect my backpack from thieves. He demonstrated his point with various mock slashes of his hand where a razor could be directed to separate me from my belongings. He said that since he sewed bags and purses, he was quite familiar with these slashing techniques. Even though our discussion was back to one of the negative aspects of Naples (high rates of petty theft) I appreciated the pizza chef and his patron’s concern for an outsider’s welfare in Naples. Since it was a particularly slow night, the pizzaiolo chef (who the pizzeria is partially named for, Allassandro) brought out a bottle of white wine, Nutella chocolate, bread, and a photo book. Allassandro, the leather worker, and I split the bottle of wine and had an entertaining discussion on pizza. Allassandro said he had been making pizza since he was three, and showed me some photos of himself and the various pizzerias he worked at until he was able to start his own pizzeria. His most recent picture was of one of his protégés from Japan, who had worked in Naples for a year before returning to Japan to assumedly work in the Japanese pizza industry. Allassandro was quite proud of his foreign pizza student. 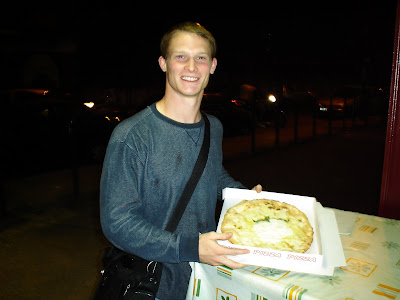 After I finished my pizza and a few slices of the Nutella pizza, I thanked the men for dinner and departed. As I left the leather worker gave me another good-natured warning on how to safely carry my bag in Naples. Demonstrating good technique I kept one strap over my shoulder and the rest of the bag in front of me.
As for the pizza, which I try to remain objective in evaluating, I gave my Quattro Formaggi pizza slightly above average marks. The pizza was more creamy than four distinct cheese tastes. Normally a four-cheese pizza will contain one strong cheese, either a bleu cheese or gorgonzola, which is then balanced by creamy and neutral cheese tastes. This pizza was good, but did not have the four distinct flavors I have come to appreciate in other Italian Quattro Forgmaggi pizzas. I also probably enjoyed the crust as much as the cheese itself. On a scale of one to ten I give the toppings a 5 and the crust a 5.5