As far as I know, Pozzuoli, a suburb of Naples where I often eat pizza, was the first place that St. Paul set foot on Roman soil on his journey to Rome some two thousand years ago. The only mention of Paul’s time in Pozzuoli is in chapter 28 of the New Testament book of Acts. The city of Pozzuoli, or as it was then referred to as ‘Puteoli’, is mentioned as a place where Paul pulls ashore and rests for one week before trekking north to Rome. It would be nearly impossible to stay for a week in Pozzuoli and not be directed to the pizzeria of Acqua & Farina (A&F) in modern times. The biblical writer of the book of Paul makes no mention of great pizza during the seven day visit to Pozzuoli, but I can assure you it was probably left out by accident only. If you ate pizza at A&F you would probably remember it. A&F is a pizzeria I like to visit in between my trips to new pizzerias since I am certain to get a great pizza, almost without fail. The Campangola was no exception to my previous pizzas here. This pizza had excellent mozzarella and succulent fleshy olives. The salami was spicy, probably ground with picante, and the mushrooms tasted fresh. The crust was good, but was noticeably thinner in the center than previous pizzas here. A thin crust supporting heavy ingredients can make for a messy pizza that is harder to appreciate for its collective taste. Other than that slight criticism, on a scale of one to ten I give the toppings a 7 and the crust a 5.5 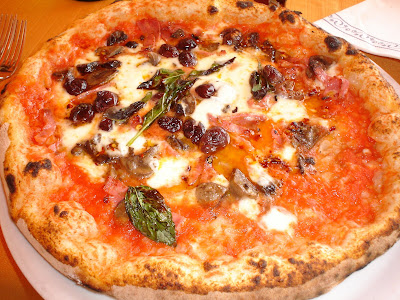