Normally pizzas that contain potatoes are greasy, stomach-filling dishes that have little emphasis on taste. The most common of the potato pizzas is the ‘wurstel and patata’ pizza which is basically just a hot-dog sliced into several pieces combined with french fries, all placed on a mozzarella pizza. That type of pizza is sometimes called ‘Pizza Baby’ or ‘Pizza McDonalds’. Occasionally potatoes are added with a bit more culinary flare, and the pizza of the house at Primavera 1964 manages to incorporate mashed potatoes with success.

This is a tri-partite pizza; one part potato and sausage, one part a ricotta and ham calzone, and one part prosciutto al crudo. I was impressed with this pizza and the ‘variable crust’. According to the different ingredients, the crust seemed to thin and thicken as necessary. For example the crust was quite thin for the sausage and potato portion. Thin crust is a common feature of pizzas in Rome, and helps to offset heavy starch and protein ingredients (like potatoes) with a thin crispy crust. However it is not typical for Neapolitan pizzas to have thin crust, and I thought this was a nice adaptation by the chef. For the calzone portion the crust was thick and creamy. The final portion of al crudo prosciutto was the least notable of this pizza but still good. On a scale of one to ten I give the toppings a 7 and the crust a 5 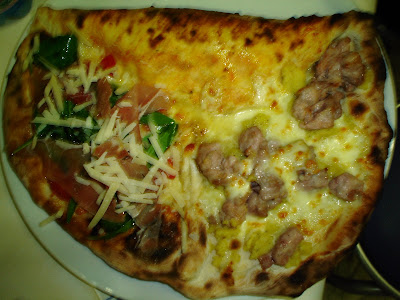 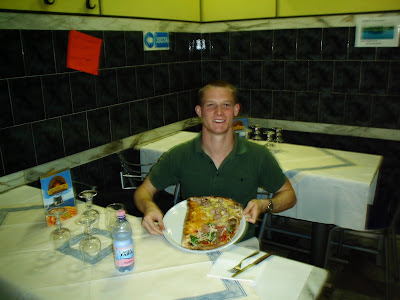