For the better part of the day several fires had been burning unchecked along the mountains in northwest Naples. The fires had generated heavy smoke that filled the air in Naples, and from the road I was driving on near a town called Pianura, I could see the entire side of a mountain rapidly burning with orange lines of flame. The smell of wood burning and smoke had made my eyes start to water but also made me hungry for pizza, so I ducked into an air conditioned pizzeria along Pozzuoli’s seafront road in order to address both my smoke-induced symptoms. Neapolitans seem to react to these fires with nonchalance as if it were as normal as the weather. Early September is the peak of fire season, as three months of near drought-like conditions reach a climax. The fires are more like self-induced weather though, as careless drivers often throw their cigarettes out of their windows on to the road side. Anyone who drives after sundown can attest to this as thrown cigarette butts often scatter visible embers across the road. Uncut brush, extremely dry, makes perfect kindling for a sudden brush fire. My waiter at Mare Luna seemed to be unconcerned by the fires less than two kilometers away and simply shrugged his shoulders and asked for my order.

The Pizza Mare Luna was a combination pizza, part calzone, part al crudo pizza. This pizza had excellent crust with about average ingredients. The calzone portion, included warm ricotta and ham, which were delicious. The Al Crudo portion had prosciutto, shredded parmesan, arugula, and tomatoes as the typical toppings which were good- but not great. Arugula was bit bland, the parmesan was good, and the tomatoes were average. I should mention that all of these pizzerias along Corso Umberto enjoy a great view of the Bay of Naples, and you can follow up your pizza with a walk in the newly completed sea side park directly in front of Mare Luna. On a scale of one to ten I give the toppings a 5.5 and the crust a 7 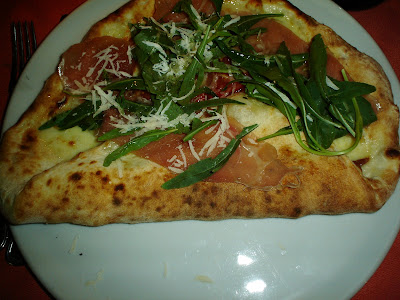 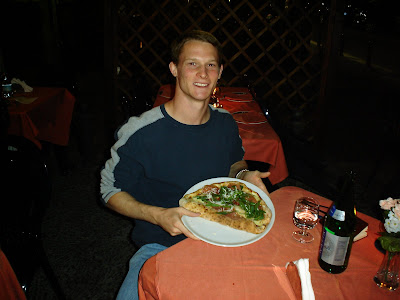