Pizza and Fight (almost). For a lesson in Italian chauvinism, just try getting between a Neapolitan teenager’s car and the next traffic sign. While walking to one of Naples’ more famous pizzerias, Di Matteo, I cut in front of a Fiat Punto driving haphazardly along the cobblestone street I was on. Pedestrians, scooters, and compact cars seem to intermingle along roads and sidewalks in a fluid fashion, so I was surprised when the teenage driver, sporting purple pants and a purple shirt (I could not see his socks, but these were likely to be purple as well), hit his brakes next to me in order to give me the evil eye for not stopping for him. It probably didn’t help that I yelled the only word I could think of in Italian at the time, translated as ‘go!’ or ‘get!’ but I lacked the fluency to explain I thought he was braking to stop in front of the store I was closest too. Just when the teenager seemed to be ready to get out of his car to make a scene, an older Italian women selling fried zucchini at a stand near us walked out and began yelling at the purple shirted boy. I once read in a tour guide of Naples that Neapolitan men find an older women’s scorn particularly unbearable. Sure enough, the teenager put his keys back in the ignition and drove off. For a society that has notable patriarchal trends in business and religion, a surprising amount of deference seems to be given to older Italian women.

I finished my trip through the heavily crowded road of Via Tribunali and found Di Matteo, famous for serving Pres. Bill Clinton pizza during a G8/G7 summit in the 1990’s. Although the pizza chef (pizzaiolo) later went on to found his own separate pizzeria named ‘The President’, Bill Clinton’s face still graces the front of the glossy business cards Di Matteo distributes. Di Matteo’s pizza gets right to the central themes of Neapolitan pizza, good thick crust, at a cheap price. Di Matteo also features a pizza elevator, which operates to serve diners on the second and third floors.

The inside of Di Matteo is probably one of the most inviting (and hot!) settings in Naples. The Boscaiola pizza was unusual for having ground hamburger on top as the main meat topping-uncommon to Naples and the Campania region. The crust was fine and almost supported the heavy ingredients of the ground meat, cream, mozzarella, mushrooms and peas. The crust thinned out in the center, and could do with less cream poured over the top since it probably led to some undercooking of the center crust itself. Still, a good inexpensive pizza. On a scale of one to ten I give the toppings a 6.5 and the crust a 5 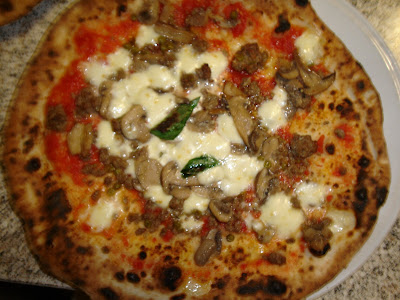 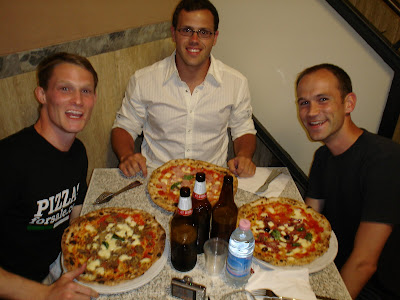