Pizzeria Metro is a pizzeria near a Metro-subway stop. I say this to differentiate it from the numerous pizzerias named Pizzeria al Metro (pizza by the meter) that populate Italian towns. I find this particular pizzeria unusual for two reasons: One, it is the first pizzeria, out of over a hundred pizzerias I have eaten at, that has a female pizza chef or pizzaiolo. Two, this pizzeria managed to produce a meat pizza, without virtually any grease on the pizza base. On the first topic, having a woman make a pizza, is truly a rare thing. I have seen several pizzerias that have women supporting ingredient preparation, but this is the first time I have ever seen a woman actively prepping the pizza dough and using the pala, or shovel, to cook the pizza. Most of the pizzerias I have been in, seem to be oriented around the Italian nuclear family, almost without exception. That leaves the father or the oldest son as the pizzaiolo, the mother as the cashier, and the daughters as the waitresses. I would interpret this as a sign of respect amongst her peers and also a sign of strength. The torque of the long shovel on one’s shoulders, the hundreds of pizzas that are cooked in an evening, and the intense heat of the oven combine to make the pizzaiolo’s job a very physical one. That may help explain why men take this position more readily than women.

As for the pizza, this was a heavy extra meat pizza. Bacon, white sausage, and prosciutto-so-thin it was almost translucent, are the toppings for this pizza. You can be certain that many animals died to make this pizza, and that after consuming it you are on the top of numerous food chains. The meager non-meat additions include black olives along with a standard mozzarella and tomato base. This pizza is surprisingly grease-free. That feature can only speak to the high quality, low-fat cuts of meat that were chosen in the pizza’s preparation. With so much protein it would be impossible to not feel full after eating this pizza, but the absence of any greasy liquid helps to give the diner a full feeling, rather than a sick feeling. When eating an all meat fourteen-inch pizza, that is quite an achievement. On a scale of one to ten I give the toppings a 6.5 and the crust a 5.5 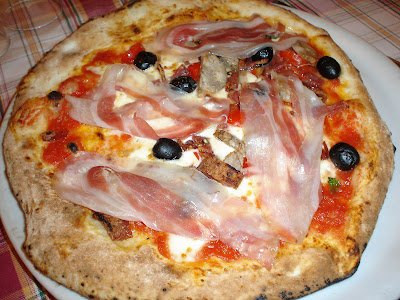 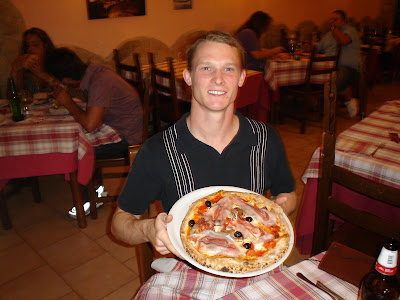