For my next pizza in Poland I decided to try a seafood pizza, since I was in a port city that had a long tradition of fishing. Gdynia’s city crest is a sword plunged through two fish, so ordering a tuna and capers pizza seemed like a safe bet in this region. I was served a massive thin crust pizza, with sliced tomatoes (not a tomato sauce substitute) and mozzarella forming the pizza base. Anyone who has had pizza in Rome would recognize this style of pizza as one from the region of Lazio. The irregular crispy crust shape is a feature of pizzas in Lazio, and allows a pizza chef to show-off their ingredients or preparation method. While Campanian pizzaiolo’s seem to take great pride in the crust they produce, I have noticed that the thin-crust producers are forced to focus more on their meat and vegetable ingredients since there is less crust per bite in the diner’s mouth. Pizzeria Boolvar falls into this second category.

Capers with tuna are a good choice, especially if the chef wants to mute the ‘fishy’ smell of the tuna. The addition of chopped onions still gives this pizza a strong taste with little flavor detectable from the mozzarella. I couldn’t see their oven from my seat outside, but post-consumption forensic analysis leads me to conclude that this pizza was indeed cooked in a brick oven. The presence of uneven ‘char’ and of flour on particular edges that may have been passed from the pizza shovel were present on the pizza. The crust certainly tasted like it was brick-oven heated. On a scale of one to ten I give the toppings a 6 and the crust a 5 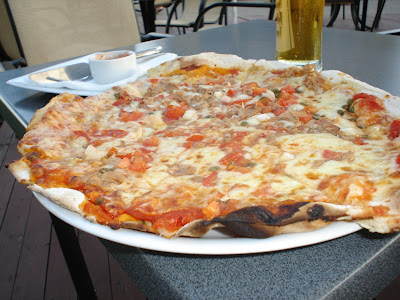