Initially the waiter balked at my request to order the two-person pizza. I was hoping that he was pleading in Italian that ‘Senor, it is too dangerous to eat this pizza alone!’ Since this was the pizza named after the restaurant I had to eat it though. It is worth eating this pizza- even if you are alone, as the crust was one of the best I have had in Italy. The four section pizza was baked with an American-sized level of mozzarella cheese. The crust included a layer of ricotta cheese baked into the center. There were also additional strips of ham baked into the center, although this may have been overkill and did not contribute to improving the crust at all. The four sections consisted of eggplant (aubergines), prosciutto and rucola, mushrooms, and margherita. The eggplant and margherita were high quality, the mushrooms and prosciutto were average. The crust had a creamy consistency due to the ricotta, but did not suffer the fate of being undercooked, as many heavy topping pizzas can be. Instead of undercooking the heavy pizza, the pizzaiolo managed to cook the pie long enough to sufficiently heat the dough an avoided burning the toppings- a delicate balance. There is also a four person version of this pizza on the menu, although I am not sure if the pizza chef could evenly cook such a huge pizza. On a scale of one to ten I give the toppings a 6 and the crust a 7.5 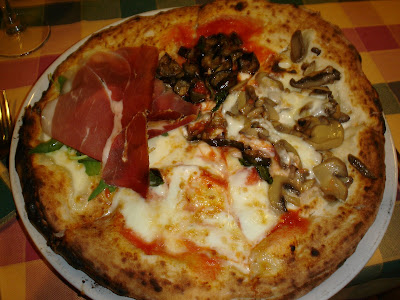 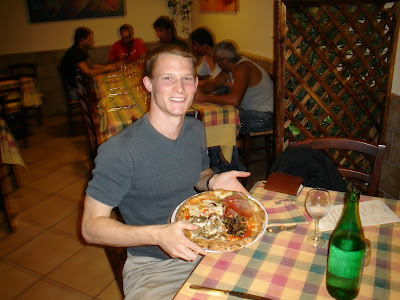