Masquenda’s Pizzaiolo baked this pizza with the air of a religious right. The ‘Tronketto’ is one of the oddly shaped rectangular pizzas that still show up underneath the pizza category on the menu. The Pizzaiolo first prepared a regular Margherita pizza and then folded the crust several times until the pizza looked like a self-contained rectangle. The rectangle-pizza was then cooked for several minutes just like any other pizza 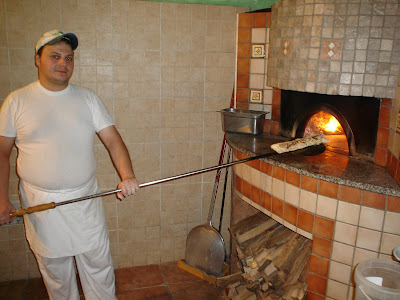 The chef then placed the cooked pizza on the counter and placed several layers of uncooked sliced prosciutto on the top of the pizza, followed by a perpendicular layer of arugula, which formed a cross. The Pizzaiolo then spread shredded parmesan on the prosciutto and arugula. Finally he took a bottle and drizzled virgin olive oil with the same ritualistic movement of a priest performing the sign of the cross. 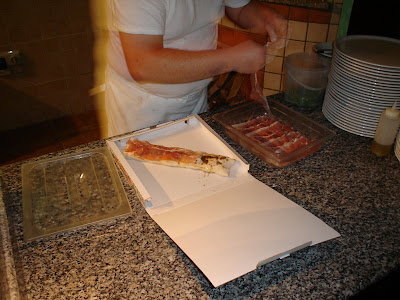 This was an awesome pizza. The unusual shape helped retain the creamy flavor of the cheese inside, and most importantly the cuts of prosciutto were tender and almost entirely free of fat. The shape may be uncommon, but the pizza is excellent. On a scale of one to ten I give the toppings a 7 and the crust a 6.5 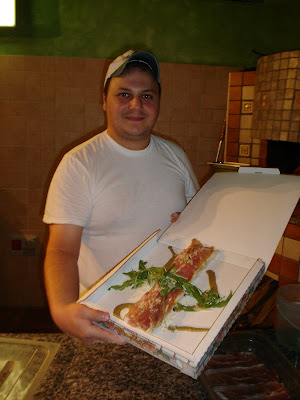 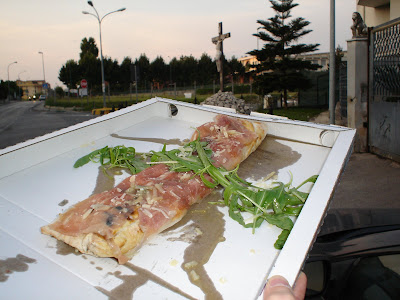