La Tana di Sapori sits on the edge of Lago D’Averno in the city of Pozzuoli. Like many locations in Naples, if you attempt to drive in the general direction of your destination you paradoxically will not reach it. Driving at Lago D’Averno will take you many places other than Lago D’Averno. It takes a bit of luck to thwart the opposing one-way streets, but eventually I reached the very crowded ‘di Sapori’ . I have experienced the Neapolitan travel paradox before when I tried to drive toward IKEA. Instead of finding the IKEA parking lot, I ended up along a road on the north-western slopes of Mount Vesuvius-nowhere near IKEA. Although I have not tried this, I still firmly believe that if you attempt to drive towards Mount Vesuvius you will most definitely reach the IKEA parking lot.

As you might expect from a pizzeria that sits between two bodies of water, ‘di Sapori’ serves excellent seafood pizza. The ‘La Tana di Sapori’ is a pizza heavily loaded with muscles and clams. The pizza base consists of only olive oil and sliced tomatoes, leaving you to savor the seafood without any other flavoring. The clams and mussels were thoroughly cooked, yet still tender. A scattering of arugula was also spread over the clams for flavor. The crust was undercooked a bit in the center, probably from all the heavy toppings absorbing the bulk of the brick oven’s heat. On a scale of one to ten I give the toppings a 6 and the crust a 4 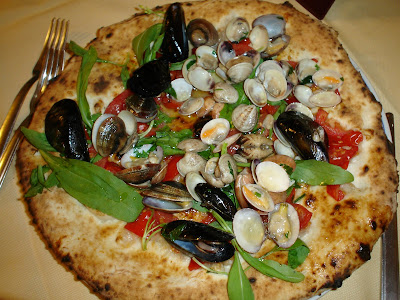 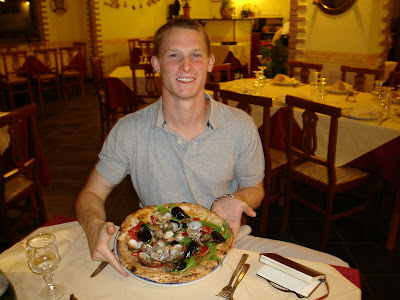