I ran into a Brooklyn pizzaiolo in a pizzeria in the town of Caserta. With typical Brooklyn bluntness, the pizza chef told me to stop speaking broken Italian and just order my pizza in English. Livio, (or Leo) explained that he had grown up in Brooklyn but had returned to Italy with family ten years ago. Leo also explained that his pizza’s differed from those in downtown Naples as he used much spicier meats and cheeses in his signature pizza (which I ordered). This is about the fourth pizza chef in as many pizzas who have been New Yorkers-returned-Naples. I found the biggest reason for their return has been opportunity: Work and steady wages in the United States gave many of these chefs with Neapolitan family connections the opportunity to save capital and start their own franchise in the city of their forefathers. Much has been written about the impact of immigrant communities on American cuisine over the past three centuries, particularly in regards to the mass immigrations from Sicily and Campania following World War II, but I wonder what the impact has been on Italian pizzerias by the New York-Naples reverse immigration trend and the associated flow of start-up capital and American style eating preferences…

Leo made his ‘Brill Parlante’ pizza with spicy salami and goat cheese. Rather than offset the spicy picante in the salami with a blander cheese (like additional mozzarella), Leo instead topped the pizza with Capri Formaggi, or goat cheese, which was equally potent. The two particularly strong tastes-the smoky taste of the cheese and the spicy and peppery flavor of the salami make for an excellent pizza. Your taste buds do have some respite, since the base of the pizza is made from regular dairy milk mozzarella topped with fresh arugula and cherry tomatoes. The picante salami produces enough grease to obviate the need for more any olive oil on the top of the pizza (which most Neapolitan pizzaiolo’s add to their pizzas with a two-second pour from a brass pitcher). That is not a criticism of the salami, but just a reason to have less olive oil on this particular pizza. I departed with a promise from Leo that he could reproduce ‘any pizza out there’ no matter how unusual if I gave him advanced notice to gather all the appropriate ingredients. I might take him up on that. All in all this pizza had an excellent combination of toppings with good crust. On a scale of one to ten I give the toppings a 7 and the crust a 5.5 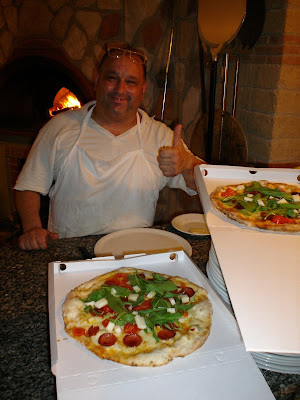 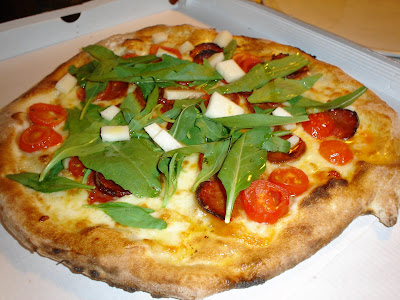