While exploring the neighborhood of Secondigliago for more pizzerias, I ran across an absolutely packed pizzeria, with lines of Neapolitans stretching out the door and well back towards the next deli. That was the only hint I needed to see that this was a pizzeria worth investigating. Carminiello has a feature similar to other popular pizzerias such as Di Matteo, in their street vendor served appetizers. Waiting customers can snack on fried zucchini or fried dough balls by the bag-full for only a single euro. If you are in a large group this is an important feature as getting more than a table for two at Carminiello will require some waiting. I was able to get seated fairly quickly by myself and ordered a filetto pizza (Margherita pizza but with sliced tomatoes instead of tomato paste). Carminello has one of the rare distinctions of employing female chefs near the brick oven. I’ve never seen this anywhere else, but after some observation it seemed that the two women working with the pizzaiolo were only performing ingredient preparation. I have yet to date seen a women act as the pizzaiolo (the pizza chef who turns and bakes the pizza with the ‘pala’) . In the heavily paternalistic society of southern Italy I doubt I will find a woman who is a pizzaiolo, although it is common to have female family members work in every other role in the pizzeria. The pizza here is excellent. The simple filletto was delicious, and the pizzas with heavier ingredients looked great as well. Secondigliago is a neighborhood most tourist would not visit, but the pizza is just as good as some of the well known pizzerias in downtown Naples like Di Matteo and Da Michele, with an authentic ambiance as well. This place is definitely a find I have yet to see mentioned in tourist books. On a scale of one to ten I give the toppings a 6.5 and the crust a 6 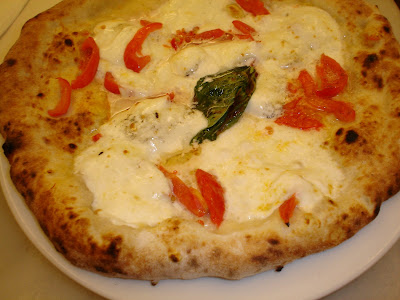 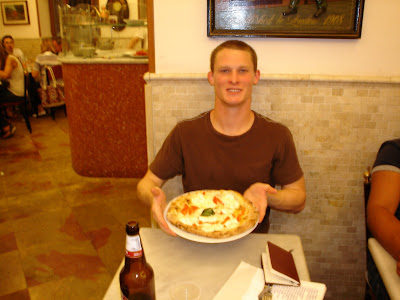