Frequently during the summer months you can enjoy a decent firework show seated at this restaurant and those nearby. A number of small towns on the peninsula west of Naples celebrate their patron saint’s day by shooting fireworks over the bay of Naples. IL Capriccio can be especially good in this respect since it sits on the isthmus leading out into the peninsula. If I had to say Naples did one thing better than the rest of the world other than pizza, it would be firework displays. Neapolitans have become famous lately for setting fire to many things; including things that ought not to be torched such as vehicles and carcinogenic trash, but almost without fail Friday night in the summer months is a great period to view fireworks from any restaurant along the bay.

Pizzerias in the area of Pozzuoli, Bacoli, Baia and Lucrino are also known for their fresh seafood cuisine, and consequently delicious tuna and salmon pizzas. IL Capriccio failed to follow through on that regional culinary tradition, and produced a lackluster tuna and tomato pizza. As I have mentioned before, tuna and vegetable pizzas in Naples have none of the evocative fishy smell that a tuna & mayo cafeteria sandwich might possess. My comment does assume the cut of tuna is fresh, and is seared rather than overcooked so the tuna retains a sweet flavor. The ‘Stammi Lontano’ pizza does not escape mediocrity, and receives no help from the undercooked pizza dough. No disrespect to whomever or whatever Stammi Lontano is/was but I didn’t like your pizza. On a scale of one to ten I give the toppings a 4 and the crust a 3.5 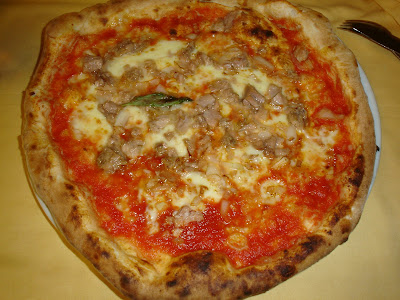 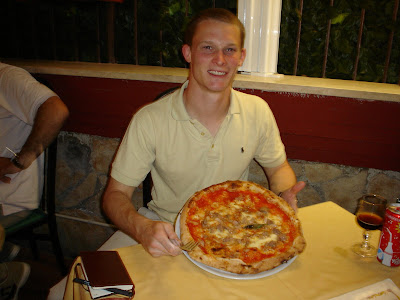