La Notizia pizzeria came highly recommended to me, mainly for the multiple person pizza-sampler they serve to large groups of dinner parties. So maybe ordering a single pizza was a mistake, but I found their ingredients to be average, and their pizza crust to be undercooked. Although maybe I missed their best with the ‘La Notizia’ tomato and mushrooms pizza, this pizzeria is apparently doing something correct since they also successfully run a Pizza Consulting business in addition to this pizzeria in Vomero, Naples. I am not certain what pizza consulting entails, but I assume it involves the technical and culinary aspects of setting up and operating a pizzeria. While there are many successful pizzerias in Naples, competition among these establishments is intense. On a street in Naples, like Via Tribunali, you will easily find five pizzerias within a few minutes walking distance of one another. Unlike the Starbuck’s model, where market saturation can breed higher consumption of a single brand, these establishments are all in competition with one another for a fixed number of meals. I don’t think I would expect five steak houses in the United States to operate literally next to one another, and have all five restaurants remain open after a year of intra-steak competition. That I have not seen many pizzerias failing, may speak more for Italians propensity to eat pizza often than it does of any particular restaurant model. So I am still unsure as to what the essence of pizza consulting is. As for the pizza, the tomatoes and mushrooms were diced, and placed on a base of buffalo provolone cheese. The ingredients formed a watery mix at the center (which accounts for the poor crust at the center). The buffalo provolone was rich and creamy, and tasted especially good on the outer edge of the pizza crust that was crispy. This pizza would have been better with more of the provolone cheese and less of the tomatoes and mushrooms which were not all that spectacular. On a scale of one to ten I give the toppings a 5.5 and the crust a 4 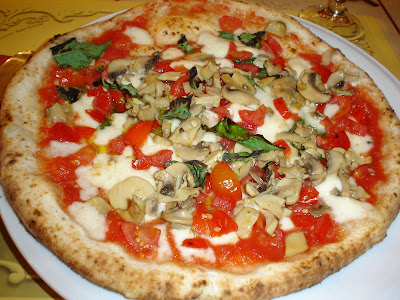 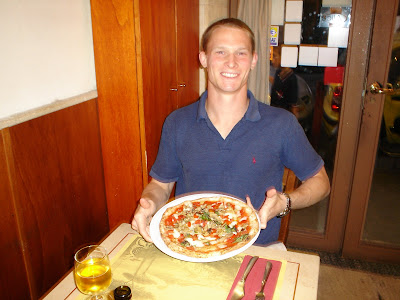