(€)Pizza and lunch included in the tour

Today I met the water buffalo, from which Italian buffalo mozzarella comes from. The water buffalo were smelly and messy, and why any Italian several hundred years ago, would look at these creatures and see the potential for good cheese, is beyond me. However I am glad someone discovered the culinary contribution these animals could make. I went on a tour of a water buffalo farm and a mozzarella shop that processes buffalo milk, both in the area of Salerno, Italy. The tour ended with a pizza and some great cheeses produced from the buffalo milk itself. 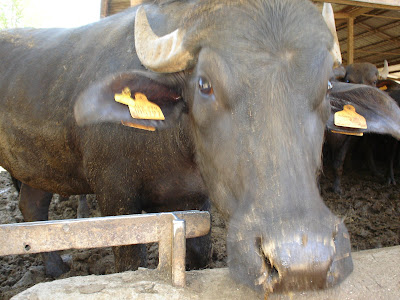 Water buffalo definitely do not belong in Italy, but according to my tour guide, water buffalo may have been brought from Central Asia as early as 700AD to fight in public displays in Rome and the surrounding region. Southern Italians makes a big deal out of this zoological oddity, and it would be something akin to having the Canadian Panda, or maybe a Siberian Giraffe as a regional icon. Although the Italian water buffalo was not actually documented until the 12th century AD, at some point the domestication of water buffalo for milk occurred in Southern Italy. In Naples, Mozzarella di Bufala is considered the premium mozzarella to have on a Margherita pizza. Buffalo mozzarella is noticeably creamier than the mozzarella produced from cow’s milk. Pizzas prepared with buffalo mozzarella taste better than pizzas made with regular mozzarella, but do cost two to five Euros more than their normal counterparts. 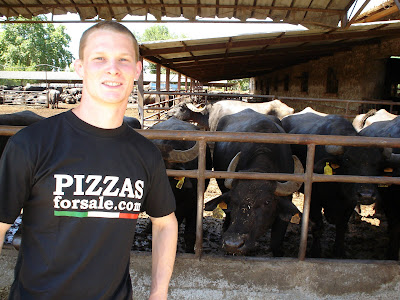 The tour also included a stop at the buffalo mozzarella shop, which demonstrated how mozzarella shops convert buffalo milk into the rubbery hand-sized ball of cheese. While the process seems complex in details- what temperature to steam the milk to, what percent salt water to add to the mozzarella, buffalo milk is basically heated and cooled repeatedly until it reaches the right consistency to be chopped and served. The mozzarella makers take various opportunities during this process to remove curd from the tops of the large stainless steel vats to create other kinds of cheese, like ricotta. In all, I counted eleven different kinds of cheese, all formed from buffalo milk, which were sold at the front counter of the store. 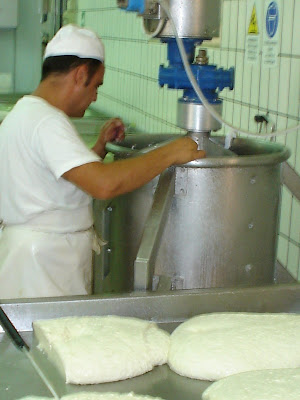 At the end of the tour I was able to sample a variety of these cheeses, dishes and pizza that included buffalo milk products. The ricotta and Parma ham pizza was fine, although the best cheese I tasted was buffalo ricotta covered with honey. I have not yet seen that particular combination in Italy but it was great, as a non-standard dessert or as a side dish served with red and yellow peppers. I think the tour would have been slightly better if it finished with a traditional buffalo mozzarella pizza rather than a ricotta pizza, but the sampling of cheeses and toppings was the main focus anyway. On a scale of one to ten I give the toppings a 4.5 and the crust a 4 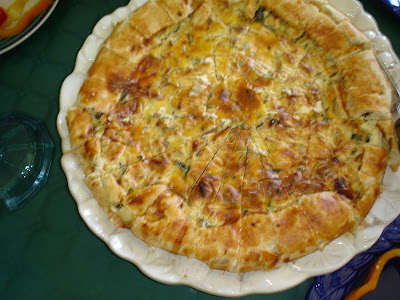