O’Montese is in one of the poorer areas of Pozzuoli, which is not to discredit the pizzeria, some of the best pizzerias are in areas that appear run-down but still have a rich culinary heritage. Pizza itself was a plebeian food in Naples, and the class-based nature of the food is one reason inexpensive flatbread and olive oil became so pervasive in Italy. Much more interesting than the Al Crudo pizza I had at O’Montese was the eagerness of the pizzaiolo to marry away one of his customers, a chain smoking women named Maria. After taking my seat in a swarm of mosquitoes and flies, the pizza chef, who had just shoved my pizza dough in the brick oven, asked if I was married, and then queried if I was interested (enter stage right) in one of his customers. Maria looked to be in her late forties early fifties, and to my surprise took the pizza chef’s recommendation to join me at my table. I offered some of my beer to her in the empty glass in front of me to be civil. Maria liked to smoke and since she spoke almost no English, and I speak too little Italian, we mostly said nothing until the pizza chef’s wife sat down with us. The wife asked for both our phone numbers and then exchanged the slips of paper with us, thereby expediting the process by which these things do….. or do not happen.

One advantage to Maria’s non-conversational company was that her chain smoking had dispelled the cloud of mosquitoes that had been within the pizzeria’s outdoor patio. The wife came back to play matchmaker some more, and this time asked me how old I was, mentioning that Maria was in her thirties. Which illustrates one universal truth: Women lie about their age. Then Maria asked me how old I thought she was. I said she was thirty three. Which illustrates a second universal truth: Men will lie about a women’s age when asked. Maria’s take-out pizza, and her second cigarette were finally finished, she said goodbye and took off with the number I had written down. I’m glad this all didn’t distract me from a good pizza, since the pizza was rather poor. The speck (ham) was very poor, fatty, and difficult to chew. Crust was too thin in the center and the arugula was not fresh. Oh well…at least I met Maria. On a scale of one to ten I give the toppings a 2 and the crust a 3 and Maria a …… 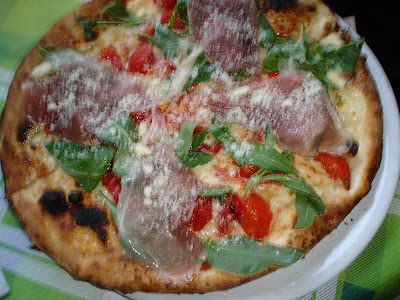