I discovered that one of my local pizzerias had a change in ownership, and feel a sense of loss. The name of the restaurant didn’t change but the pizzaiolo , the owner, and even the beer endorsement for the restaurant had changed. Would they make my Quattro Formaggi the same? Would the Del Lago pizza, one of their best, still have the folded crust? These and other trivial culinary concerns were assuaged when for the most part, I had an excellent sausage and spinach pizza. I was surprised to hear the staff speak English (which the previous owners did not) with a slight New York accent. Yes, they had been working at a pizzeria in upstate New York, and had saved up enough money to come back and buy their own pizzeria. Although the change in ownership feels a bit odd, it does mean I will be able to have more of my pressing pizza related questions answered since the two brothers can converse in English.

So, on to the pizza. The best Salsiccia E Friarelli I have had yet. Unlike a particularly bad version of this pizza I had at the famous Pizzeria Brandi, the sausage was not greasy, the spinach leaves were not sopping wet, and the dough was not undercooked. The sausage was slightly crispy, yet still tender on the inside, and the spinach had been drained enough to allow the crust underneath it to cook fully. The crust was good, as well as the base of mozzarella cheese. On a scale of one to ten I give the toppings a 6.5 and the crust a 6 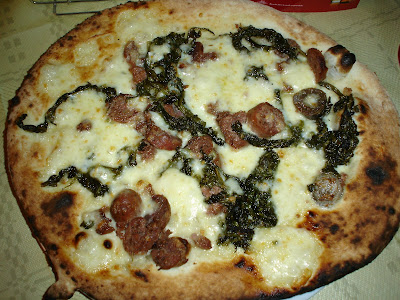