Good- not great, pizza. Pizzeria Gorizia has a good reputation for having superior dough and crust…. and while good, I would in no way claim that what I had was superior to the rest of Italian pizza crust. Like many well known pizzerias, Gorizia does a robust delivery and take out business, so it is clearly popular with the local Italians. I had the four-taste pizza, also known as Quattro Gusti or Quattro Stagioni. Gorizia’s four sections were: Eggplant (Aubergines), Ham, Mozzarella, and Mushrooms. Excellent Eggplant, good mushrooms, average ham and mozzarella. I have to admit that I don’t know enough about quality ham and prosciutto to judge the difference between ham that tastes like ‘mush’ and ham that ‘tender’. To me the ham tasted bad, and lacked flavor. If I was to eat here again I would recommend eating a pizza with just the eggplant since it was the best of the four tastes. On a scale of one to ten I give the toppings a 5.5 and the crust a 5.5 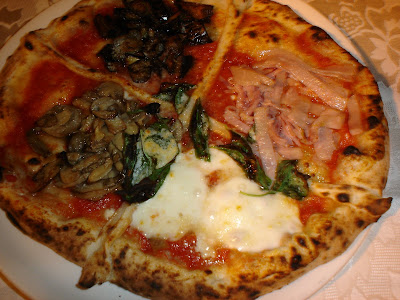