My friends in Florence were excited to tell me they had found a Neapolitan pizza in Florence…so for my first pizza in this city I was not able to try any Florentine pizza just yet. Parking near il Pizzaiulo appeared to be impossible until one of my Italian friends showed me (with my car) how Italians parallel park. First he moved someone’s Vespa scooter, lifting it up and sliding it over several feet, until it was touching the bumper of a Fiat Punto. He then backed my car into the scooter, nudging it slightly, and finally edged forward into the other car, literally bumper to bumper, pushing the compact car slightly ahead to create enough room for my car. He wasn’t haphazard or reckless, but showed a lot less concern for small collisions than I would. Giving a slight tap to the front of my bumper with his foot, my friend said “hey that’s what its there for,” I was more concerned about how I would get out, but with the parallel parking done we were off to il Pizzaiulo. The pizza here is fully Neapolitan in preparation to include the toppings (an affinity for ricotta cheese by the chef) and in the crust (big puffy edges). I ordered the Bomba, which is heavy on meat and cheese. The pizza also has mushrooms scattered throughout, which makes this a very heavy pizza. Heavy but good. Many strong tastes compete in this pizza, with garlic and basil mixed into the tomato sauce base making the pizza aromatically pleasing as well as fine tasting. The meat, cheeses, and mushroom are all tasty, but don’t necessarily standout as fine salami, mozzarella, or ricotta. The combined effect of having two meats and cheeses simultaneously melt in your mouth is what really makes the pizza good. After asking a bit about the pizzerias in Florence I tend to get the feeling that the better pizzerias are trying their best to recreate the Neapolitan style of pizza rather than promote the thin-crust pizza which is more typical in the north. This pizza was good but I’ll search for something more authentic for my next pizza in Florence. On a scale of one to ten I give the toppings a 6 and the crust a 5 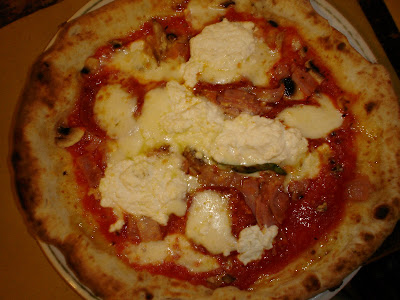 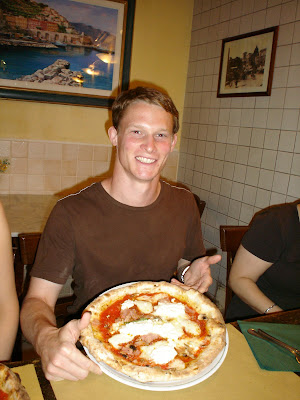