Superior ingredients, lackluster crust. Mr. Baker baked my first Kosher pizza to date. I had the tuna, purple onion and mozzarella pizza with a spice grown in Israel called Zatal (which I think I spelled correctly). The tuna was fresh not fishy, the onion was sweet and the mozzarella was cooked until the tops of the cheese was crispy. The chef did not use a brick oven, but instead used an electric/gas oven. On one hand this type of oven lets the chef cook the mozzarella until it becomes crispy, which gives a different texture to cooked mozzarella. I happen to like that type of mozzarella taste. However, a gas fired oven provides none of the ‘char’ on the outer edge of the crust that can enhance the natural flavor of the dough. A gas or electric heated oven also provides no rapid expansion of dough to make the crust tasty (because of the lower baking temperature). Pizza dough should turn into something more than just a crisp bread stick with toppings on it, and the ‘bread stick’ result is my main criticism of this pizza. If you are still hungry for dessert after a large pizza here (the large pizza is huge for a single person) Mr. Baker has some great chocolate pastries as well. On a scale of one to ten I give the toppings a 7 and the crust a 3 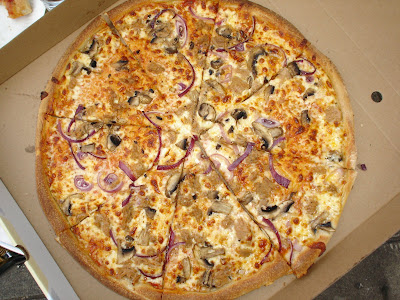