I eat pizzas with three guiding principles; Quality, Diversity, and Novelty. This pizza in Luxembourg represented my interest in the latter principle of novelty. I thought I wouldn’t find a brick oven pizza in Luxembourg, but sure enough Le Beaujolais had its own brick oven, and a thriving delivery/take-out service going on during mid-day lunch. Aside from this pizzeria and the main square, I did not see much else of the micro-nation, not that there was much to see. There were a lot of pictures of the royal family in ever storefront to include the pizzeria I was in (maybe this is some royal mandate made by the photogenic royal family), and numerous Luxembourgian flags. They are a very proud micro-nation. As for their pizza, it was average-to below average, even with the brick oven. My vegetarian pizza had little freshness and included canned artichokes and mushrooms. However, Luxembourg leads the world in pizza box warming technology. The insulating metallic sheen the pizza box interior easily kept my pizza hot for the two minute walk out into the capital’s main square. Such advanced technology has yet to reach Naples…where we are still in the cardboard age. This piece of pizza technology is probably a vital part of the pizza box required during the brutal Luxembourgian winters, when Margherita pizzas can easily freeze to death. On a scale of one to ten I give the toppings a 3 and the crust a 3 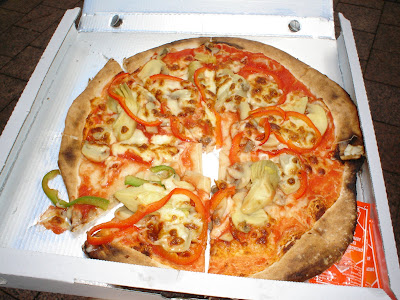 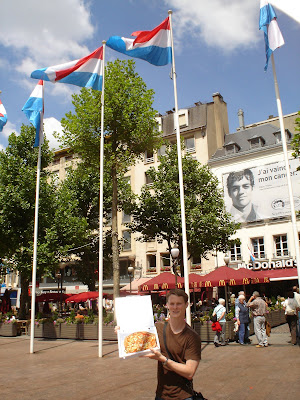