Two points for this place. One, the restaurant’s interior was much less tacky for a place called ‘Ghost Busters’ than I expected. It was upscale in everything but the occasional porcelain ghost candle holders, and a Halloween ghost hanging from the center of the restaurant. Two, the pizza itself is great. This restaurant has genuinely fresh mushrooms and tuna.

The restaurant’s name is a general reference to the number of bianco pizzas they produce, that don’t rely on any tomato base for the pizza toppings. This topping-style is common in Rome, but Ghostbuster’s seems to hit on a theme that emphasizes the kind of toppings they use to set them out from the numerous pizzerias in Rome. The pizza itself comes in an odd shape, and with a bit of imagination you can see how the dough may have resembled a white ghost (with black olive eyes) before it entered the wood-fired oven. This place also scores points for ambiance and is apparently in the art and bookshop district of Italy.On a scale of one to ten I give the toppings a 7 and the crust a 4.5 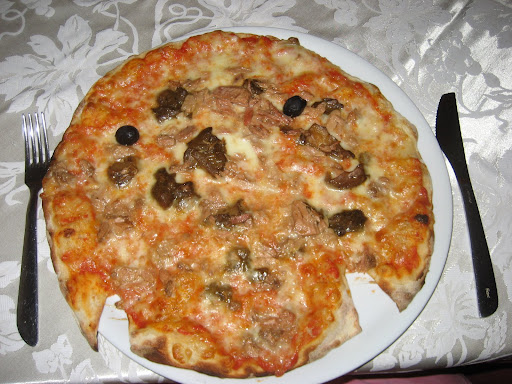