Boccuccio di Rosa, located in Pozzuoli, Naples easily passes the ‘Local Test’. Almost everyone at the restaurant on a Saturday evening is from Naples and there are long lines throughout the night to get seated inside the restaurant. Boccuccio di Rosa is both a brick oven pizzeria and a ristorante with a pasta menu that serves complimentary bruscetta to their guests, perhaps to sate your appetite after such a long wait to get seated. I ordered the two-person pizza, also named after the restaurant: Boccuccio di Rosa. Only the crust itself is actually cooked, with a large number of fresh al crudo toppings on the crust. The tomatoes, prosciutto, shredded parmesan cheese and ample arugula are good in and of themselves, but the stuffed crust really makes this pizza. The crust contains baked ricotta cheese and diced mushrooms, which really could be its own dish anyway. Combine the stuffed crust with fresh meat and cheeses on top, and the Boccuccio di Rosa is an excellent pizza. Its best to eat this pizza on an empty stomach or with a second person, and skip the appetizers and bruscetta. I believe this crust rates as the best crust I’ve had so far. On a scale of one to ten I give the toppings a 7 and the crust a 7.5 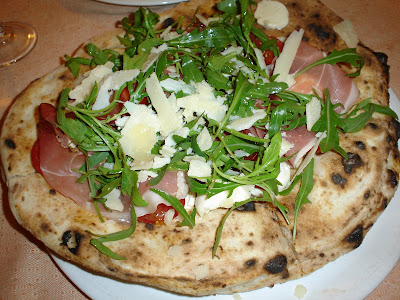 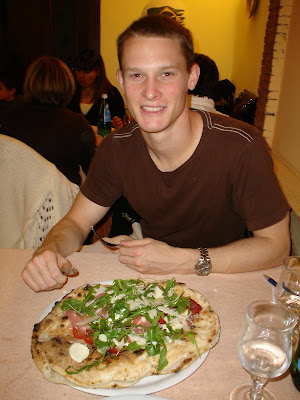